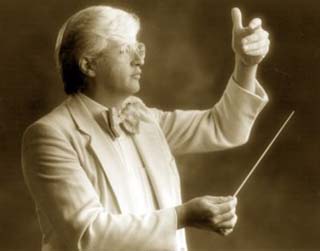 Martyn Ford studied horn at the Royal Academy of Music for four years with the international soloist Ifor James, gaining the highest grades possible for the instrument.

In his fourth year at the Academy, Martyn formed his own symphony orchestra made up of talented music students from the four London music colleges. In 1971 the orchestra, then known as The New Sinfonia, gave its first concert at the Royal Albert Hall, to much critical acclaim. Martyn was principal horn and the programme included music by Bruckner, Dvorak and Schubert.

Soon after, the orchestra became known as The Martyn Ford or Mountain Fjord Orchestra, and was immediately in demand for record, film, television, radio and advertising music work, and soon monopolised those sections of the music industry.

He has conducted, arranged and recorded twice with World, European and British Champions, The Black Dyke Band, one being with Paul McCartney and Wings, the other an album of McCartney and Wings hits arranged by Martyn. He has also appeared as guest conductor with several other Championship Bands, including Sovereign Brass, The Staffordshire Band, and The Camborne Town Band. He has also recorded with The Leicester Foresters and The Leicester Foresters Brass Dectet, and was their MD for over a year.

London West End credits include “Showboat” with Cleo Laine at the Apollo Theatre, “Jesus Christ Superstar“ and ”Les Misérables” at the Palace Theatre. Virtually every Gilbert and Sullivan Opera at the home of The Doyle Carte Opera Company, Golders Green Hippodrome, and Ballet Rambert at the Jeanette Cochrane Theatre. He has also worked on productions of “Chess”, “Oklahoma”, “The Gypsy Baron”, “South Pacific”, “Carousel”, “Camelot”, “Beauty and the Beast”, and in Birmingham,“HMS Pinafore” conducting an orchestra and soloists from The Birmingham Conservatoire. As Music Director for Rutland Musical Theatre, his credits included “Anything Goes”, “42nd Street”, “Fiddler on the Roof”,“Crazy For You”,” Oklahoma” and “South Pacific” in April 2009.

Martyn has been Music Director for the Peel Partnership, (a sea cruise musical production company) and The Broughton Open-Air Festival.

Martyn has been Music Adviser to The Arts Council of England and East Midlands Arts.

Based near Cardiff and in London, Martyn works as a conductor and music director, concentrating on the symphony orchestra and brass band repertoire, opera, musicals as well as music for soundtracks, cinema and television commercials.